A Glossary of all the Cryptocurrency Terms you need to know

Scrolling reddit, this site or other cryptocurrency related forums on the internet and having no clue what people are talking about? Well, nor was I when I first started getting involved into cryptocurrencies. Therefore I thought it would be useful to have a glossary of all the terms you may come across.

Exchange (see collection)
Websites where you can buy and sell crypto-currencies. Some popular exchanges in North America are:
Coinbase

FIAT
Government-issued currency, such as the US dollar.
https://en.wikipedia.org/wiki/Fiat_money

Whale
Someone that owns absurd amounts of crypto-currency.

Limit order / limit buy / limit sell
Orders placed by traders to buy or sell a crypto-currency when the price meets a certain amount. They can be thought of as ‘for-sale’ signs. These orders are what are bought and sold against when traders place market orders.

Market order / market buy / market sell
A simple purchase or sale on an exchange at the current price. Market buys purchase the cheapest ETH available on the order book, and market sells fill the most expensive buy order on the books.

Margin trading
The act of ‘magnifying’ the intensity of your trades by risking your existing coins. (NOTE: Very risky, only for experienced traders and only on certain exchanges even then)

Going long
A margin trade that profits if the price increases.

Going short
A margin trade that profits if the price decreases.

Bullish
An expectation that price is going to increase.

Bearish
An expectation that price is going to decrease.

ATH
All-Time-High. We’ve gotten a lot of these the past couple months.

Altcoin
Generally any crypto-currency other than Bitcoin or Ethereum. (Though some Bitcoin folks would probably still say Ethereum is an altcoin)

Tokens
Refers to the ‘currency’ of projects built on the ethereum network that have raised money via issuing their own tokens. Examples:
GNT – Golem
REP – Augur
BAT – Basic Attention Token
ICN – Iconomi

ICO
Initial Coin Offering, somewhat similar to an IPO in the non-crypto world. Startups issue their own token in exchange for ether. This is essentially crowdfunding on the ethereum platform.

Shilling / pumping
Someone essentially advertising another crypto-currency. If a coin is promised to cure cancer or be the second coming of Jesus, it’s being shilled.

Stable coin
A crypto-currency with extremely low volatility that can be used to trade against the overall market.

Arbitrage
Taking advantage of a difference in price of the same commodity on two different exchanges. Often mentioned when it comes to comparing ETH prices on Korean exchanges against US exchanges.

FOMO
Fear Of Missing Out. The overwhelming sensation that you need to get on the train when the price of something starts to skyrocket.

FUD
Fear, Uncertainty, and Doubt. Baseless negativity spread intentionally by someone that wants the price of something to drop.

FUDster
Someone that is spreading FUD.

Pump And Dump
The recurring cycle of an altcoin getting a ton of attention, leading to a fast price increase, and then of course followed by a huge crash.

Bagholder
Someone still holding an altcoin after a pump and dump crash. Can also just refer to someone holding a coin that is sinking in value with few future prospects.

Market Cap
The total value held in a crypto-currency. It is calculated by multiplying the total supply of coins by the current price of an individual unit. This site shows a great run-down of each coin’s market cap: http://coincap.io/

ROI
Return on Investment. The percentage of how much money has been made compared to an initial investment. (i.e., 100% ROI means someone doubled their money).

TA
Trend Analysis or Technical Analysis. Refers to the process of examining current charts in order to predict which way the market will move next.

Bollinger Band
A margin around the price of a crypto that helps indicate when a coin is overbought or oversold. More information available at: http://www.investopedia.com/terms/b/bollingerbands.asp

blockchain The classification of technology that Ethereum falls into. Blockchains are distributed ledgers, secured by cryptography. They are essentially public databases that everyone can access and read, but the data can only be updated by the data owners. Instead of the data residing on a single centralized server, the data is copied across thousands and thousands of computers worldwide. More detailed information available at: https://en.wikipedia.org/wiki/Blockchain

Node A computer that possesses a copy of the blockchain and is working to maintain it.

Mining
The process of trying to ‘solve’ the next block. It requires obscene amounts of computer processing power to do effectively, but is rewarded with ether.

Fork A situation where a blockchain splits into two separate chains. Forks generally happen in the crypto-world when new ‘governance rules’ are built into the blockchain’s code. Some more information available at: https://en.wikipedia.org/wiki/Blockchain#Hard_forks

PoS
Proof-of-stake (not piece of shit). The proposed future consensus algorithm to be used by Ethereum. Instead of mining in its current form, people that own ETH will be able to ‘lock up’ their ether for a short amount of time in order to ‘vote’ and generate network consensus. The plan is that these stakeholders will be rewarded with ETH by doing so.

sharding
A scaling solution for blockchains. Typically, every node in a blockchain network houses a complete copy of the blockchain. Sharding is a method that allows nodes to have partial copies of the complete blockchain in order to increase overall network performance and consensus speeds.

software wallet
Storage for crypto-currency that exists purely as software files on a computer. Software wallets can be generated for free from a variety of sources. MyEtherWallet (MEW) is one of the popular. (more on MEW below)

cold storage
The process of moving crypto-currency ‘offline’, as a way of safekeeping your crypto-currency from hacking. There are a variety of ways to do this, but some methods most commonly used:
—Printing out the QR code of a software wallet and storing it somewhere safe, such as a safety deposit box.
—Moving the files of a software wallet onto a USB drive and storing it somewhere safe.
—Using a hardware wallet.

Solidity
One of the most popular languages that smart contracts can be written in. Has some similarities to Javascript.

Dapp
Decentralized Application. This refers to an application that uses an Ethereum smart contract as it’s back-end code.

Raiden Network
An upcoming protocol change to Ethereum that will enable high-speed transfers across the network. It is similar in some aspects to Bitcoin’s planned Lightning Network. The name, I assume, comes from the Mortal Kombat character named Raiden that can shoot lightning. More reading available at: https://themerkle.com/what-is-the-raiden-network/

Frontier, Homestead, Metropolis, Serenity
The four planned stages of the Ethereum development roadmap. We are currently in the Homestead phase. The Metropolis update is likely to be available sometime in the next year.

MEW
MyEtherWallet. A free site that can generate ethereum software wallets for you.

EEA
Enterprise Ethereum Alliance. A coalition of startups and corporations trying to figure out the best way to use this dang thing.

Vitalik Buterin
One of the primary co-founders of Ethereum (and certainly the most well-known). A brief biography is available at: https://en.wikipedia.org/wiki/Vitalik_Buterin

DAO
Decentralized Autonomous Organization. An investor-directed venture capital fund built on the Ethereum network that was hacked in June 2016. The hack stole about a third of the DAO’s funds and led to Ethereum being hard-forked the following month. The DAO is often cited as one of Ethereum’s biggest stumbles thus far.

Hodl
Long ago, someone on a bitcoin forum got drunk and made a post with this typo in the place of ‘hold’. A meme was born. https://bitcointalk.org/index.php?topic=375643.0

lambo
https://www.lamborghini.com/en-en/
What we’re all going to buy when we’re rich. Obligatory: https://imgur.com/uKKwhcf

This is gentlemen
“This is it, gentlemen”. Used to point out positive things that are currently happening. http://www.urbandictionary.com/define.php?term=This%20is%20gentlemen

Mooning
In the crypto-world, this does not mean exposing your buttocks. It is referring to a price going up astronomical levels. 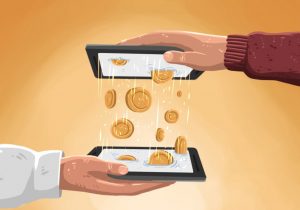 What is Crypto Lending? An Explanation.

In this article, you will learn… how crypto lending works, a simple explanation why crypto savings accounts...

Bitcoin Profit Review: Is It Fraud Or Is It Legitimate?

Bitcoin continues to be a top-performing asset going on 10 years strong. The main method that users are earning profits...

Click to join us on Slack →
Feedback and suggestions →
Advertise on Cryptominded.com →